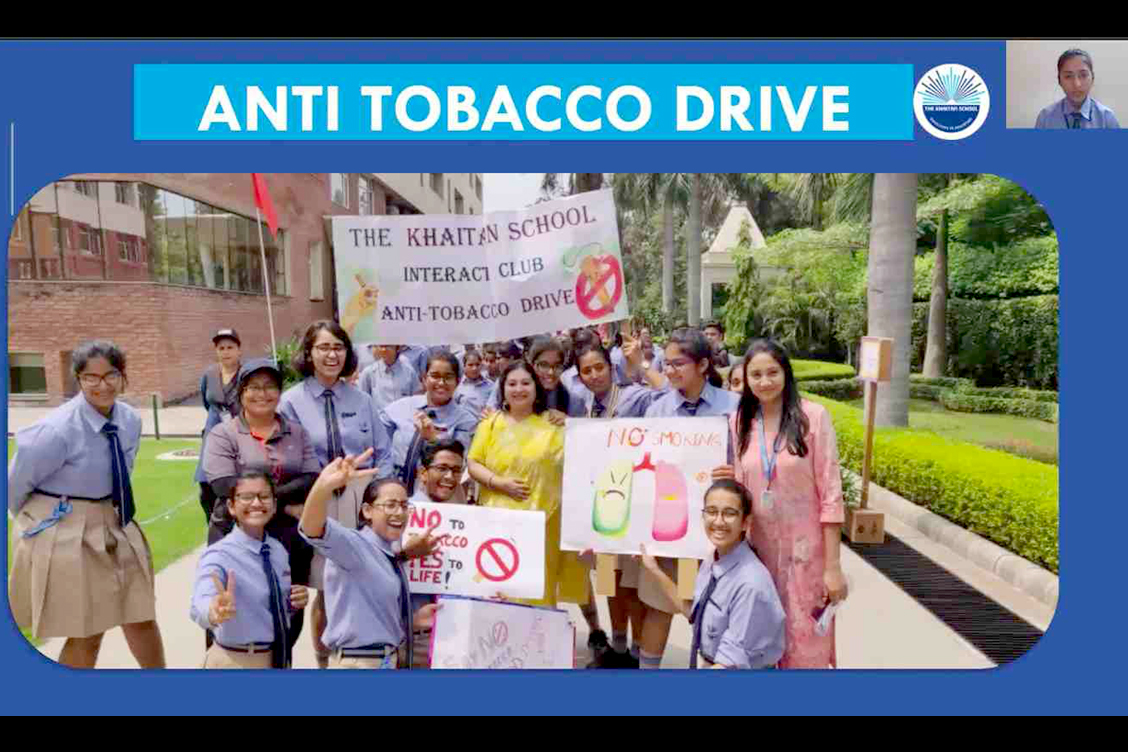 The Installation Ceremony 2020-21 was held with its usual pomp and glory, albeit on a virtual platform on 29th August 2020. This time around, the event, which started with clock-work precision at 11 AM, witnessed the coming together of the President, Rotary club of Noida, Rtn. Naveen Agrawal, Secretary, Rtn Manu Seth, Director Youth Services Rtn. Maj Dalbir Singh,other distinguished Rotarians,Principal Mrs. Rina Singh, Head of Senior School Mr. Sajeev Philip, 173 interactors including 13 council members. Mrs. Bindu Gupta who shows the Interactors the way through thick and thin and Mrs. Geetanjali Sharma, yet another pillar of support was among the other faculty members present for the Ceremony

Rotarian Mr. Naveen Agrawal,  President Rotary Club of Noida, congratulated the School on having been decorated with the most coveted Rotary International Citation with Platinum distinction .He congratulated the fresh inductees and briefed them about the seven-fold approach of the club this time, ranging from basic literacy to environmental issues.

The address of Principal Mrs. Rina Singh lay emphasis on how the involvement with the club could be a valuable service to the community at large, besides catering to the inclusive nature of education that could infuse us with not just exemplary compassion, but also admirable traits of leadership. All the dignitaries present on the occasion were taken through the detailed report of the club’s feats covering an entire array of areas from blood donation to fund-raising for community welfare in Session 2019-20 by Past President, Interact Club,Tanoushka Rawat

The gracious presence of Major Dalbir Singh, Mr. Satyapal Sharma, Mr. Vinod Budhiraja, Mr. and Mrs. Walia, Mrs. Jessbir Dardi and two of our own alumni, who were there as special guests, brought a rare splendour to the event.

An exhilarating performance by Manya Gupta with an awe-inspiring song, ’Ashao Ke Pankh Lagakar’ under the able guidance of Mrs. Ruba Munshi and an enchanting dance fusion of three classical styles Bharatnatyam, Kathak and Odissi performed by Sakshi Uberoi, Advika Agarwal and Chetana Shankar respectively, under the able guidance of Mrs. Manju Wazir, added grandeur to the whole ceremony and left the audience awestruck.

Mrs. Bindu Gupta, who galvanizes the club into its active best was praised whole-heartedly by all. She proposed the vote of thanks after having showered her blessings on the new DIR Ms. Sanika Singh. Mrs. Gupta made a special mention of our Education Director Mrs. S.L.Gupta, Trustee Mr. Vedant Khaitan and our former Principal, Mrs. D. Kaur. She went on to say that our present Principal has instantly put herself right into  the thick of all things to do with the Interact Club, promising a wonderful productive year ahead, pushing ourselves constantly from the tiny circle of ME to that of WE and widening the periphery of the services from the SELF to an ever-growing team.